A play examining my own love of the Western canon—specifically the work of Henrik Ibsen, Anton Chekhov, and August Strindberg—by placing three of its heroines in a room together and making a play out of it. 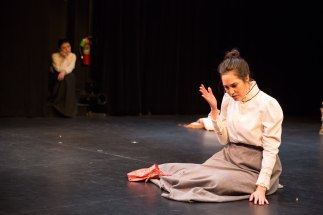 NORA
It’s a compromise.
My husband objects to me ruining my teeth with sweets.
And I’m spitting them out, because
It’s a compromise! This way, no one’s happy.
My teeth are ruined, AND I don’t get the joy of eating the darn things.
(Pause.)
I’m trying to show the universe it’s wrong.
(Pause.)
“Have you no religion?” he says.
Good question! I say.
I have no idea! I say.
“I know nothing but what the clergyman says. He told us that religion was this and religion was that. When I am away from all of this, I said, I will look into that matter too. I will see if what the clergyman said is true, or in any case—”
In any case,
YES in any case
If it is true FOR ME!
(Pause.)
And now,
Well, I get this distinct sense that the universe just wants certain things.
Not that it’s necessarily aware that it wants things.
It’s more like a magnetic pull thing.